Editor’s Note: This is a featured guest post from Arjan Singh and Justin Lam.

We’ve all heard of what happens when you take a vacation to North Korea – you are treated to a comprehensive guided tour supervised by local North Korean government minders tour guides who take you to see everything that the government wants you to see and nothing that they don’t want you to see. But who are these guides and what are they actually like? Based on our recent visit, here are…

1. They love their government’s propaganda.

This is a slight misnomer. If you are expecting stories about Kim Jong-Il hitting 11 holes-in-one in golf, you’ll be disappointed. The propaganda you’ll get in North Korea is an oddly plausible, one-sided spin of the facts rather than outright fantasies. For instance, we all know that the North Korean military has built invasion tunnels into the South – but did they really? Why build vulnerable tunnels across the DMZ when the South could neutralize them by just putting a couple machine gun turrets in front of them? Surely these tunnels aren’t effective military tool! And if America is such a wonderful place, why is it so unsafe that even presidents are routinely assassinated? That never happens in North Korea.

That said, not every guide ferverously believes the stories they tell. Many guides we encountered (both our main guides and the guides in the different museums/attractions) varied greatly in enthusiasm for the propaganda. One museum guide we encountered was so overcome by simply mentioning Kim Jong-Il’s name that she almost burst into a giggle every time she said it. Another just smoked and wryly cracked jokes.

“This is what we call a library check-out counter!”

Despite their reputation as “government minders,” North Korean tour guides are, in many ways, just like other tour guides. They have to keep diverse groups of tourists entertained, fed, on schedule, and happy. This is complicated by the fact that everything they plan also has to be approved by their bosses, with whom they are constantly on the phone.

On our tour, floods in the northern part of the country prevented us from taking a trip to the mountains, so the guides had to find new things for us to do in Pyongyang like a several hour visit to an industrial museum where we looked at mining equipment and learned about North Korean coal. 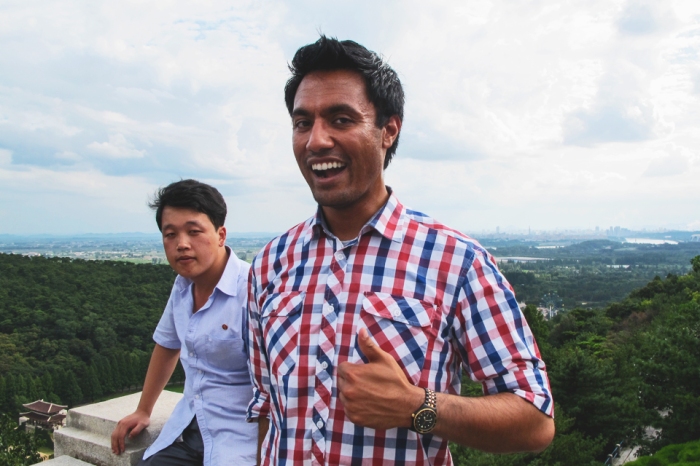 Our guide (in the back) is probably wondering why we’re disrupting his cigarette break.

But like other tour guides, as they develop a rapport with our group, they would show us local points of interest at are off script like a small general store for foreigners that happened to get us close enough to get a photo in front of nearby famous Ryugyong Hotel. 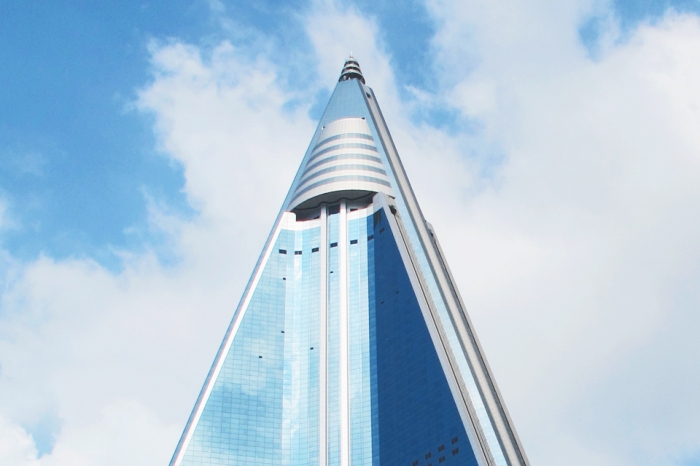 The iconic Ryugyong hotel in North Korea. But does it launch into space too?

3. They have a pretty good life, for North Koreans.

For North Koreans, being a tour guide isn’t a bad job. They live more comfortably than the average North Korean and their jobs come with many perks, such as tips from tourists in hard currency (Euros, US dollars, and renminbi are all used by tourists) and gifts! Before taking Air Koryo, we were instructed to buy gifts in China for the guides such as cigarettes, beauty products, and chocolates. Everyone loves chocolate!

“We’re required to accompany you at all times…especially on amusement park rides!”

4. They love their country and care about how its perceived around the world.

The guides know that North Korea has a negative reputation to the outside world and are genuinely concerned about how their country is perceived. (Who wouldn’t be?)

One morning, one guide appeared distraught and informed us that there were anti-DPRK demonstrations going on at the London Olympics. Apparently, some defectors exhibited pictures of some North Korean prison camps.

Our guide was upset that traitors were trashing his country, though with a very regime-friendly spin, “Why would they leave North Korea when their families and country need them?”

Our guide shows clueless westerners how to perform a salute.

The guides were also interested in what we had heard about North Korea back home. One asked us how Kim Jong-Un was depicted in Western media at the time. We replied that he was seen as something of a mystery and that we didn’t know much about him, other than that he smiled more than his father and he had a wife who we thought was a singer. This was true at the time (Summer 2012).

If we were asked this now, we probably wouldn’t say that Kim Jong-Un is depicted as a petty child dictator who kills his family members in occasional purges, and listens to Creed.

In the end though, the guides are not brainwashed automatons or servile puppets. They are real people, with real families and real hopes, even if at times they do drink a little too much Juche Juice.

There were plenty of times where we had fun with the guides and (we hope) they had fun with us. They joked about us staying in North Korea permanently (“Sorry everyone, I lost your passports.”). We freaked out on the amusement park rides that (of course) they accompanied us on. We drunk beer and sung karaoke together. One of our single male guides even chatted up a cute girl while visiting the Pyongyang Gold Lane bowling alley. Unfortunately for him, she had a boyfriend.

Where North Koreans go for fun.

On a trip to visit the Juche Tower we had a great view of Pyongyang, and one guide pointed out the school that her son had attended, “It’s a school for geniuses!” Her son is now studying at the university, and while there may be things that are fake about North Korea, there was nothing fake about the pride she took in her son. 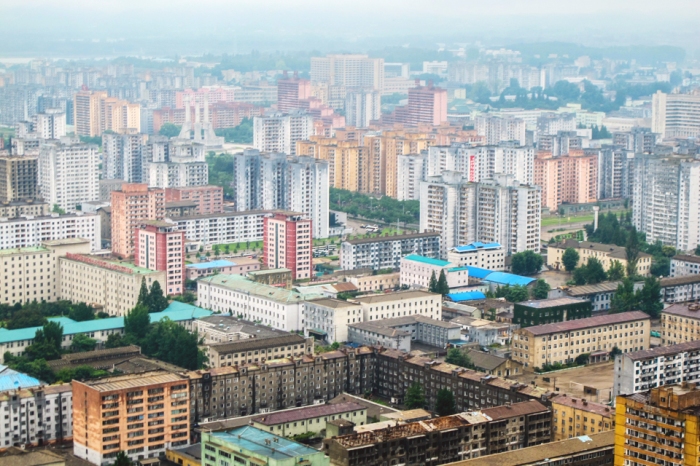 Arjan Singh and Justin Lam Biography
Much like Harold and Kumar, Justin and Arjan are two non-stereotypical people of Asian descent who often find themselves in strange and odd lands. Unlike Harold and Kumar, they have never met Neil Patrick Harris and are not obsessed with tripping balls.